US top aide to keep up pressure on Israel and Palestinians 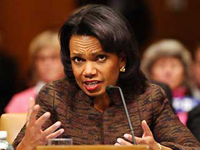 US top aide to keep up pressure on Israel and Palestinians

A national security adviser sent by Bush to the Middle East will urge Israel and Palestine to reach agreement on launching formal peace talks.

The announcement came as U.S. Secretary of State Condoleezza Rice said she was encouraged by what she had heard from the two sides during four days of intense talks with Israeli and Palestinian officials and civic and business leaders in Jerusalem and Ramallah in the West Bank.

But Rice also acknowledged tensions between the two sides as they try to formulate a joint statement that will be presented at a U.S.-hosted conference in late November or December at Annapolis, Maryland, where the United States hopes to announce the start of new formal peace negotiations to create a Palestinian state.

"That is the character of this kind of endeavor, but I was encouraged by what I heard," she added.

National security adviser Stephen Hadley will visit the Middle East next week to follow up on Rice's round of diplomacy and Rice will return to the region for further discussions with Israelis and Palestinian at the end of the month or in early November, the U.S. official said.

The trip will also take Rice to an Iraq neighbors meeting in Istanbul, Turkey, said the official, who spoke on condition of anonymity because neither the Hadley trip nor Rice's return visit have been formally announced. The official did not give specific dates for the travel.