To overcome world hunger the U.N. food agency must become leaner and less bureaucratic if it is to meet the challenges of the future. 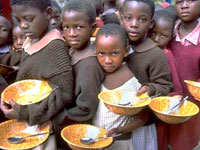 The experts looked at ways to reverse what they say is a "financial and program crisis that imperils the organization's future in delivering essential services to the world," according to the report.

A draft report with similar conclusions regarding the U.N. Food and Agriculture Organization was issued in August. But the final report, released Thursday, offered more than 100 recommendations for reform. And the report said that all the problems it identified can all be resolved.

The panel recommends that the agency set a precise list of priorities.

A new strategic agenda should be a "realistic one" and define what FAO can effectively accomplish in areas such as feeding the world, preserving the environment and fighting poverty, as well as when and with what resources, said Keith Bezanson, the main author of the report.

Among the measures recommended by the panel are simplifying the hierarchy and removing layers of bureaucracy within the organization, as well as decentralizing authority.

The Rome-based FAO is one of many U.N. bodies to have come under recent pressure to reduce costs and increase efficiency. The United States has been one of the strongest critics of the organization and has advocated budget cuts at FAO as part of overall U.N. reform.

This was the first independent evaluation of the FAO since the agency was founded in 1945 with the aim of improving nutritional standards around the globe. Six experts worked on the report, visiting 35 member countries and conducting thousands of interviews.