Ahmadinejad: Putin has no nuclear proposals 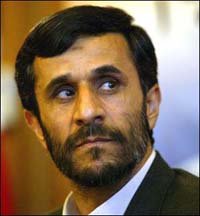 Ahmadinejad: Putin has no nuclear proposals

Iran's official news agency IRNA quoted Khamenei as saying he would give Putin's proposal serious thought before giving a response, though it gave no details on the proposal. "We will ponder your words and proposal," Khamenei said, according to IRNA.

"There was no nuclear proposal. Putin's message was a message of comprehensive cooperation and friendship," he was also quoted as saying by the semi-official Fars News agency.

Another semi-official news agency, ISNA, said that the "president rejected reports about a nuclear proposal by Putin in their recent meeting."

There was no immediate explanation for the discrepancies between Thursday and Wednesday's reports, or the diverging statements from Iran's supreme leader and the president. Calls to officials on Thursday was not immediately returned.

It was not clear whether Ahmadinejad meant that Putin had not presented a proposal to him or had not offered any proposal to Iranian leaders at all during his visit to Tehran. But the comments raised the possibility that Putin brought the offer directly to Khamenei, going over Ahmadinejad's head.

Khamenei holds ultimate say in all political issues in Iran and is believed to at times take a direct hand in setting nuclear policy. Ahmadinejad holds less direct say in nuclear issues - and some in Iran have criticized him, saying his inflammatory rhetoric has exacerbated the confrontation with the West.

An analyst in Tehran said it can also be a sign of division among Iranian leaders. "This indicates that a part of the government intended to have a positive interaction with the West and another part still insist on previous stance and ignores the message," said Iraj Jamshidi, political editor of Etemaad independent daily.

Wednesday's reports did not specify the details of the proposal. Officials close to hard-liners within Iran's ruling Islamic establishment said they believed it included a type of "time out" on U.N. sanctions against Iran, if Tehran suspends uranium enrichment. The two officials spoke on condition of anonymity because of the sensitive nature of the issue.

The United Nations has twice imposed limited sanctions on Iran for its refusal to halt enrichment. Russia has resisted a third round of sanctions but has said Tehran must suspend the process, which can be used to produce either fuel for a nuclear reactor or a nuclear warhead.

The United States and its allies accuse Iran of secretly trying to build a nuclear weapon, a charge Tehran denies, saying its program aims only to generate electricity. Putin has said he sees no evidence Iran is building a weapon but has said Iran should not be allowed to do so.

Russia and the other permanent members of the U.N. Security Council, plus Germany, have been working together to try to find a way to get Iran to abandon enrichment.

The group has offered a package of economic and political rewards to Iran if it agrees to suspend enrichment. Iran rejected that proposal.