Russia on Thursday carried out a successful test launch of an intercontinental ballistic missile. 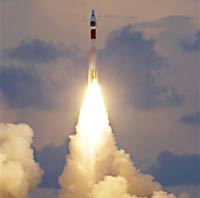 The Topol RS-12M rocket hit its intended target on Kamchatka near the Pacific Ocean, the Russian Strategic Missile Forces said in a statement.

The launch, from the Plesetsk launch facility in northern Russia, was part of the country's plan to upgrade its ballistic missiles and extend the life of its Topol missiles, it said.

Thursday's successful test will allow Russia to maintain the Topol rocket for 21 years, the statement said, significantly higher than the original 10 years.

"Extending the service life of the Topol missile class will allow for the replacement of rockets being phased out with a new generation of rocket without putting a burden on the military budget," the statement said.