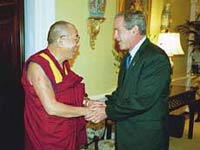 The United States has "gravely undermined" relations with China by giving the Dalai Lama an award, the Chinese government said Thursday.

"The move of the United States is a blatant interference with China's internal affairs which has severely hurt the feelings of the Chinese people and gravely undermined the relations between China and the United States," Foreign Ministry spokesman Liu Jianchao told a news conference.