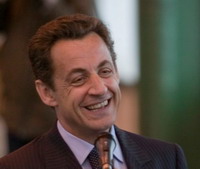 The source of the protests is Sarkozy's plan to trim special retirement packages for some workers, part of pledges to cut back on costly public services. The strikes, which began late Wednesday and were to last through Thursday, are meant to send Sarkozy a warning that deeper reforms may come at a cost.

Sarkozy is facing a number of challenges simultaneously as the economy lags, despite his pledges to invigorate it, and signs of discord arise within his own party over the president's policies. His rocky marriage also is front-page news.

The president himself appeared unfazed, saying Tuesday night he would push through the reforms regardless of public protest because "that's what I was elected for."

While France's strikes are famously common, the country has not had any serious ones since Sarkozy took office. This week's could be the biggest in years.

Sarkozy will be out of the country at an EU summit in Portugal on Thursday, while tens of millions of his compatriots will likely struggle to get to work and school.

The strike started at 8 p.m. (1800GMT) Wednesday, giving people a chance to get home from work as usual. Soon after the protest began, the Paris subway appeared to be running as usual, though screens advised travelers of disruptions to come. The bulk of problems were expected Thursday.

The Paris transport authority RATP said traffic would be "virtually nil" on most of its lines, and "nearly paralyzed" on the national rail network.

Eurostar trains to London and connections to neighboring European countries also would be disrupted.

Transit workers initiated the strikes, but employees of state-run electricity, gas and other services also could take part.

Most teachers were not planning to strike, but some schools were expected to close because of transport difficulties.

Air travel also faced potential disturbances, according to civil aviation authorities, who said there was a risk flights would be modified, particularly early in the day if administrative and airport personnel had trouble getting to work.

The strikes could overflow into Friday. Three train federations were calling for a daily vote on whether to extend the strikes.

The pension plans under threat, which cover workers at an array of different companies and institutions, were originally devised to give advantages to those in physically demanding jobs, such as miners and train drivers.

Workers covered by the special pensions are able to retire earlier and on more generous terms than the vast majority of the French working population.

Sarkozy, who pledged changes to France's labor protections during his election campaign earlier this year, deems the benefits too costly, outdated and unfair.

The head of the CGT union, Bernard Thibault, urged the government to start "real negotiation" over the retirement reform or face more strikes, according to an interview with Le Monde published Wednesday.

Meanwhile, Sarkozy is facing dissent within his own UMP party. UMP lawmakers are split over government plans for a DNA test for aspiring immigrants, and have bristled at hints he will open his government to more opposition Socialists.

The economic outlook offers little inspiration. Public deficits are widening even as forecasts for French growth shrink to 1.8 percent, less than the 2 percent to 2.5 percent the government had targeted.

And on a personal level, a respected news weekly reported Wednesday that Sarkozy and his wife, Cecilia, have informed a judge they are separating. The president's office would not comment on the report, which comes after weeks of rumors of a split.