Schoolchildren in a Kenyan slum joined a continent-spanning effort to draw attention to the crushing poverty that contributes to tens of thousands of needless deaths each day. 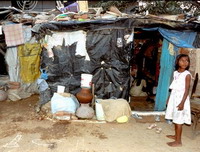 The "Stand Up, Speak Out" campaign is part of U.N. efforts to promote the Millennium Development Goals that include eradicating extreme poverty and hunger, achieving universal primary education and ensuring a sustainable environment by 2015. Hundreds of events were being staged to heighten awareness and pressure governments to act in the interests of their poorest citizens. In schools, stadiums, streets and offices from Asia to Africa, thousands of people sang songs, listened to speeches and rose briefly to their feet in moment of solidarity and protest.

In the impoverished Korogocho neighborhood of the Kenyan capital, about 1,000 pupils and a smattering of adults gathered in an outdoor amphitheater next to a garbage dump, listening to music and watching traditional dancers stomp their feet to tattoo of skin-covered drums. The children sang "We Shall Overcome" in one of Kenya's languages, Swahili, then rose to their feet and held hands while wailing the refrain from Marley's "One Love."

On the lawn at U.N. headquarters in New York, Secretary-General Ban Ki-moon and several hundred adults and youngsters recited a pledge to fight poverty.

Ban earlier spoke of his vision for a better world, where children complete elementary school, families are protected from deadly disease and there is no longer appalling poverty.

"Let us demonstrate the political will required to end the scourge of poverty once and for all," he said.

Underlying the difficulties of eradicating entrenched poverty and its related social ills, five street kids in rags infiltrated the Nairobi event and briefly mounted the stage before the assembled schoolchildren, lurching unsteadily to the music as they huffed fumes from bottles of industrial glue.

Around the world, an estimated 1 billion people live on less than US$1 per day, according to UN figures. In sub-Saharan Africa, nearly one-third of the region's 750 million people live in extreme poverty, frequently without access to clean water, decent schools, health care facilities or flushing toilets. An open sewer flowed alongside the site of the Nairobi event.

Last year, 24 million people from 87 countries around the world stood up against poverty, with India leading Asians with 9 million people, followed by Nepal with 3 million and the Philippines with 2.4 million. Organizers hoped to exceed those numbers Wednesday.

Organizers say that 50,000 people die each day from preventable causes linked to poverty and they called on participants to help fight the underlying causes.

In India, the Women's Tribunal Against Poverty, an umbrella group of women activists from the country's most marginalized communities, gathered 400 activists in New Delhi to discuss their experiences of poverty and their demands from the government.

The participants, dressed in brightly colored traditional dresses, chanted, "We will fight and we will win," and "Long live women's power."

"This conference in a sense will look at the doubly marginalized, poor women from minority communities," said Sandhya Venkateshwaram of the international non-governmental organization CARE.

In the Bangladeshi capital, Dhaka, hundreds of volunteers joined Mayor Sadeque Hossain at a rally in front of city hall, to call for an end to poverty. Anti-poverty rallies, concerts, and fairs were held elsewhere across the populous country, where most people still live on less than a dollar a day.

In Manila, the Philippine capital, about 2,000 government officials, teachers, students, soldiers and ordinary citizens, many of them wearing white wristbands with sketches of multicolored human figures, assembled early Wednesday at the seaside Rizal Park to make the pledge.

Agnes Aleman of the U.N. Information Center said the Philippines was targeting 3 million to stand up and make the pledge - in parks, government and private offices, schools, hospitals, restaurants and even at Starbucks stores - around the country from 5 a.m. to midnight.

In Nairobi, participants said official corruption had hindered their East African nation's growth, but they were confident that greater economic growth would come with increased democratic participation. Presidential elections are set for December.

"We have extreme poverty in Kenya, but many of our leaders have grown rich," said Muthoni Murango, a 23-year old university student. "We have the resources, and if the leaders put funds in the right places, the country will grow. I know it will come."