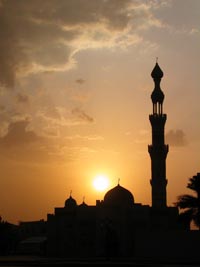 Some 350 detainees were released by the U.S. military on Wednesday as a part of a goodwill gesture marking the end of Ramadan.

However, more than 25,000 Iraqis remain in custody, most in a legal limbo where they're never charged with a specific time or given a chance before any court or tribunal to argue for their freedom. Of those who receive a proper trial, about 50 percent will be acquitted, the military says.

"Everyone should cooperate to empty all detention centers ... of anyone who did no wrong or anyone who was unjustly detained," he said. "We all must cooperate so only those left in prisons are criminals and those who actually deserve punishment."

Among the men released Wednesday, most were between the ages of 35 and 40 with the average stay about a year. U.S. military spokesman 1st Lt. Angela Webb said.

Sheik Ahmed Abu Risha, the leader of a group of Sunni tribes that has turned against al-Qaida in Iraq in Anbar province, also attended The movement's founder and Abu Risha's brother, Sheik Abdul-Sattar Abu Risha, was killed in a bombing Sept. 13.

"Al-Qaida was completely defeated in Anbar. Only small criminal gangs are left and will be destroyed," he said. "Fraternity is shared among the provinces. We can say that we have passed the crisis and we will continue efforts to release your detained brothers."

The military said Wednesday's release raised to about 1,425 detainees released this year during Ramadan, which ended this weekend.