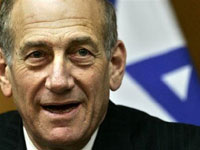 Olmert spokeswoman Miri Eisin said the two men spoke last week by phone and agreed they had much to discuss in person. The one-day trip was scheduled several days ago, Eisin said, without explaining why it wasn't announced earlier.

Due to the short notice, Olmert was not taking his usual traveling media contingent, Olmert's office said in a statement.

The visit was announced as visiting Secretary of State Condoleezza Rice met Israeli and Palestinian leaders as part of preparations for a U.S.-hosted peace conference in November or December.

On Tuesday, Putin met in Tehran with Iran's supreme leader Ayatollah Ali Khamenei, and at a summit of Caspian Sea leaders, warned outside powers - a thinly veiled reference to the U.S. - against use of force in the region.

Many Iranians fear the U.S. will attack their country, which the West suspects is secretly trying to develop nuclear weapons, despite Tehran's protestations to the contrary.

Israel has also hinted it could strike at Iran if the international community allows it to develop nuclear arms.

Iranian President Mahmoud Ahmadinejad has called for Israel's destruction and most recently said its continued existence was an "insult to human dignity."

Another possible item on the agenda could be last month's Israeli air strike deep into Syria, in which the Israeli aircraft slipped past Russian-made Syrian air defense systems, hit their target and then left again unchallenged.

Israel has been extremely secretive about the affair and only recently relaxed censorship to allow Israel-based journalists to report that Israeli aircraft attacked a military target deep inside Syria.

A U.N. news release on a meeting Tuesday of the body's disarmament committee paraphrased an unidentified Syrian representative as saying a nuclear facility was hit.

Damascus denied the account Wednesday and added that "such facilities do not exist in Syria."