Vice President Dick Cheney appears to be very close to Democratic presidential candidate Barack Obama. Cheney may call him his cousin - eighth cousin, that is. Lynne Cheney, the vice president's wife, revealed this tantalizing bit of political trivia during a television interview Tuesday. 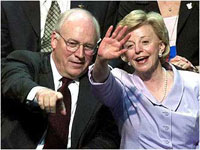 She said she uncovered the long-ago ties between the two while researching her ancestry for her latest book, "Blue Skies, No Fences," a memoir about growing up in Wyoming. "This is such an amazing American story that one ancestor ... could be responsible down the family lines for lives that have taken such different and varied paths as Dick's and Barack Obama," Lynne Cheney told MSNBC.

According to her spokeswoman, Sen. Obama, an Illinois Democrat, is a descendant of Mareen Duvall. This French Huguenot's son married the granddaughter of a Richard Cheney, who arrived in Maryland in the late 1650's from England, said Ginny Justice, a spokeswoman for Lynne Cheney. The vice president's full name is Richard B. Cheney.

A spokesman for Obama, who wants to be the first black U.S. president, offered a tongue-in-cheek response. "Every family has a black sheep," said spokesman Bill Burton. Lynne Cheney did not reference the ancestral ties between her husband and Obama in the book.