Palestinians hope U.S. Secretary of State Condoleezza Rice's visit to the birthplace of Jesus Christ will help in easing the conflict with Israel. 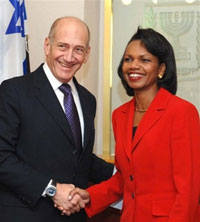 Rice has been conducting official meetings with the leaders of Israel, Palestine and Egypt this week. The tour is being held as a part of preparations for a U.S.-hosted peace conference in November or December. On Tuesday, she won tempered support from Egypt, a key mediator, for the gathering, and then headed to Jerusalem for more talks.

On Wednesday, she is to hold more meetings with Palestinian President Mahmoud Abbas, Israeli Prime Minister Ehud Olmert and other officials.

Her day began in biblical Bethlehem, with a tour of the Church of the Nativity, built over Jesus' traditional birth grotto.

Bethlehem, just south of Jerusalem, is lined on two sides by Israel's separation barrier, along some stretches a towering wall of cement blocks. Town residents need difficult-to-obtain permits to cross through a wall terminal into Jerusalem, and long lines often form during rush hour.

Rice will be able to see the wall from a Bethlehem hotel where she is meeting with Palestinian intellectuals, following her tour of the church.

"Many foreign diplomats came here supporting Israel, and they changed after they saw the Palestinians suffering from the occupation," said Salah Taameri, the Palestinian governor of the Bethlehem district. "Rice is human, and I think the wall will have an influence on her heart and mind."

Israel started building the West Bank barrier in 2002, initially portraying it as a strictly temporary defense against Palestinian suicide bombers and other attackers who have killed hundreds of Israelis in recent years. However, the barrier's meandering route and massive cost suggest it could be used as the basis for a future border.

Rice, the daughter and granddaughter of Presbyterian ministers, has said she expects an emotional experience in Bethlehem. "I am myself deeply religious so just the name is evocative in ways that I can hardly describe," she said Monday, after two days of political meetings.

Israeli and Palestinian negotiators are trying to write a joint document of principles that would guide future peace talks. Tensions arose earlier in the week when Israeli Olmert said such a document is not a prerequisite for the conference, to be held in Annapolis, Maryland.

The Palestinians insist on such a document, even if it contains only a sentence or two about the core issues, such as Jerusalem, borders, Israeli settlements and Palestinian refugees.

The U.S. has not set a date yet or issued invitations but hopes key Arab states, including Egypt, Jordan and Saudi Arabia, will attend. Arab leaders have said that before accepting an invitation, they want to be sure the conference deals with substance.

Aboul Gheit said the meeting "gives us a lot of trust and confidence" about American intentions for the conference, though he cautioned that preparations to hammer out the agenda could take more time.

Still, Aboul Gheit said the conference should be put off if a strong deal is not reached. "We have to go into the meeting ready to launch negotiations. If we need more time to achieve that objective, so be it. If we are short of time, let's extend the time frame," he said.