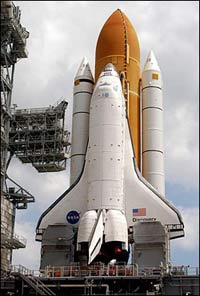 The potential problem is with the critical thermal shielding on Discovery's wings. A new inspection method uncovered possible cracking just beneath the protective coating on three of the 44 panels that line the wings.

Engineers were evenly split on whether Discovery's flight to the international space station should be delayed, shuttle program manager Wayne Hale said. In the end, top managers concluded Tuesday night following an all-day meeting that repairs were not needed.

The NASA Engineering and Safety Center - formed in the wake of the 2003 Columbia disaster - has been studying the issue since May and still does not understand why the protective coating on some of the wing panels is coming off.

It recommended additional testing, at the very least, before Discovery flies and favored replacing the three reinforced carbon panels in question. That work would have set the launch back by at least two months.

Columbia was destroyed during re-entry because of a hole in its wing.

Hale said part of what gave him confidence to proceed with the launch was the fact that two similar cases in orbit ended up being benign and the astronauts will have a repair kit in orbit for mending small damage.

In addition, "it appears that there is good analysis that says we could survive even if the worst thing happens to us during entry," he said.

The worst that could happen, said Ralph Roe, the safety center's director, is that some of the coating is lost off the front of a wing panel right before re-entry and the hot atmospheric gases burn through the entire panel.

Roe said his safety center could not get comfortable with all the uncertainties about whether the coating problem might worsen in space. The three panels in question on Discovery do not appear to have worsened over the past three flights, despite indications of possible cracks to the coating.

Engineers will continue to work to understand what is going on. "If the risk grows to an unacceptable level, we will take action," Hale said.

Unlike the sometimes brusque and hasty flight readiness reviews before the Columbia accident, "everybody got to ask questions, everybody got to give their understanding of it down to the working troop level," Hale said.