Attorney General-designate Michael Mukasey pledges to strike a delicate balance between keeping the nation safe and protecting the civil liberties of Americans. 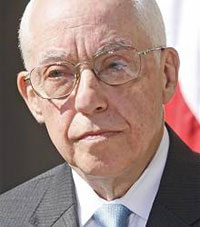 At his confirmation hearing, scheduled to begin Wednesday, Mukasey was to open with remarks aimed at convincing members of the Senate Judiciary Committee that he would act independently - not always in concert with the White House - when it comes to issues like intelligence gathering and protecting the rights of citizens.

"Protecting civil liberties, and people's confidence that those liberties are protected, is a part of protecting national security, just as is the gathering of intelligence to defend us from those who believe it is their duty to make war on us," Mukasey said in remarks prepared for delivery to the committee. "We have to succeed at both."

His remarks were obtained by The Associated Press.

Lawmakers of both parties say they do not have to agree with Mukasey on every issue. But pressured by their political bases, they will seek assurances from the nominee that he can be independent of the White House. Mukasey, a retired federal judge, was nominated for the post after the resignation of Alberto Gonzales, who stepped down after a monthslong storm over whether the White House improperly influenced the firings of nine federal prosecutors and other matters.

"The Justice Department's mission includes advising the other departments and agencies of government, including the president, on what choices they are free to make and what limits they face," Mukasey said. "Here too, the governing standard is what the law and Constitution permit and require."

He quoted former Attorney General Robert Jackson, who said that the issue between authority and liberty was not a choice between a right and a wrong. "That never presents a dilemma," he said. "The dilemma is because the conflict is between two rights - each in its own way important."

Mukasey, 66, has won the endorsement of the Senate's most combative White House adversaries after a season of political turmoil at the Justice Department. Chairman Patrick Leahy and Sen. Charles Schumer, whose investigation helped drive Gonzales to resign, predicted a swift confirmation for his would-be successor.

That is in large part because Mukasey has assured the senators that he would be willing to say "no" to the White House if it made a request he thought was illegal. He promised to review the administration's eavesdropping and interrogation techniques.

"There are still some in the administration that want the Department of Justice to be the political arm of the White House," Leahy, a Vermont Democrat, said after meeting with Mukasey on Tuesday. "I want that to change, and I think he can change it."

"If the hearings go as well as the interviews have, then he'll be confirmed by a very large majority," Schumer, a New York Democrat, told reporters.

They were striking statements of support from majority Democrats hostile to the administration on most everything else up for debate. Other non-fans of the White House, from Senate Democratic leader Harry Reid on down, have endorsed Bush's choice to take over a Justice Department left leaderless and hobbled after a series of political scandals under Gonzales.

Seldom has the Bush White House tried to placate prickly congressional Democrats into such agreeable commentary. Schumer is anathema to the White House. And Vice President Dick Cheney once greeted Leahy on the Senate floor with a profane invitation not fit for family newspapers.

But in the troubled twilight of Bush's second term, Mukasey's nomination is a political peace offering.

The president nominated him after Schumer suggested that Mukasey would be a suitable replacement for Gonzales.

Lawmakers of both parties are seeking specific assurances from Mukasey on whether he would stand up for the rule of law - and his own independent streak - no matter the presidential pressure.

Liberal interest groups and some lawmakers were pressing Mukasey for more specific assurances: repudiating the use of torture on terrorism suspects, for example. And still more promises were expected to be sought from the nominee, including a commitment to furnish the committee with documents on the legal justification for eavesdropping in terror cases.

"We should not instinctively support someone blindly. We've been burned by doing that in the past," Sen. Lindsey Graham, a South Carolina Republican, said.

Mukasey once worked as a reporter but gave it up to pursue a career in law. He was nominated to the federal bench in 1987 by President Ronald Reagan and eventually became the chief judge of the high-profile U.S. District Court for the Southern District of New York in lower Manhattan. He played a key role in the courts' response to the Sept. 11 terror attacks, signing material witness warrants to round up Muslim suspects.