A magnitude 6.4 earthquake stroke deep under the South Pacific ocean between Fiji and New Zealand Wednesday, but no after effects were reported by authorities. 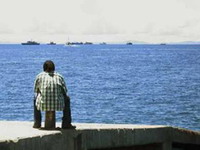 No tsunami warning or watch bulletin was issued by the Pacific Tsunami Warning Center in Hawaii following the quake, the agency said on its web site. It reported the quake as magnitude 6.6 and some 411 kilometers (255 miles) below the surface.

Emergency services reported no injuries or damage and no immediate calls reporting the quake.

Dozens of after shocks ranging up to magnitude 6.1 have hit the region of mainly farmland and national forest parks.

Some small landslips have been recorded, authorities said, but there have been no reports of serious damage or injury.

The initial magnitude 6.7 quake was the biggest in New Zealand since a magnitude 7.2 tremor struck off the same western South Island coast on Aug. 22, 2003.

GNS Science seismologist Bryan Field said six seismometers had been installed in the region to enable a close study of the after shocks.

The data would allow seismologists to determine the size and orientation of the "fault-break" in the earth's crust, he said.

New Zealand sits above an area of the earth's crust where the Pacific and Australian tectonic plates are colliding and records more than 14,000 earthquakes a year - only about 150 are felt by residents. Fewer than 10 a year do any damage.