U.S. House of Representatives's try to label the century-ago deaths of Armenians as genocide was in jeopardy Tuesday after at least a half-dozen Democrats withdrew their support and several others implored Speaker Nancy Pelosi to hold off to avoid damaging relations with Turkey. 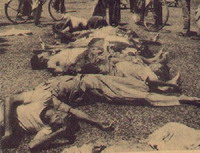 The reaction from within their party appears to be a major setback to Pelosi and other Democratic leaders. They have fiercely defended the resolution to Republicans and the Bush administration as a moral imperative to condemn the World War I-era killings of up to 1.5 million Armenians by Ottoman Turks.

House Majority Leader Steny Hoyer told reporters Tuesday that the plan remained to vote on the measure before Congress adjourns by the end of the year.

But, he added, "There are a number of people who are revisiting their own positions, and we'll have to determine where everyone is."

The most notable Democratic challenge mounted this week came from Rep. John Murtha, an anti-war ally of Pelosi, and chairman of the House Defense Appropriations Subcommittee. Murtha fought against a similar measure 20 years ago.

"From my discussions with our military commanders and foreign policy experts, I believe that this resolution could harm our relations with Turkey and therefore our strategic interests in the region," Murtha said in an e-mailed statement Tuesday.

Also this week, at least six Democrats withdrew their sponsorship of the bill and two other Democrats, Reps. Alcee Hastings and John Tanner, asked Pelosi to forgo the vote.

Hastings, who has voted against combat funding for Iraq, and Tanner, a member of a conservative Democratic coalition known as the Blue Dogs, said they feared backlash from Turkey would cut off U.S. access to a critical air base in eastern Turkey near Iraq.

"More than half of the cargo flown into Iraq and Afghanistan comes through Incirlik Air Base, and this base would be a key component of any plans for redeployment of our troops in the future," the lawmakers wrote.

In response to last week's approval of the resolution by the House Foreign Affairs Committee, Turkey summoned its ambassador from Washington for consultations in Ankara and asked the Bush administration to stop the resolution from passing in a final floor vote.

Turkey denies the deaths constituted genocide, saying the toll has been inflated and that those killed were victims of civil war and unrest as the Ottoman Empire fell into disarray. Many genocide scholars, however, consider the Armenians' deaths the first 20th century genocide.

At the U.S. Defense Department, Lt. Gen. Carter Ham, operations chief for the Joint Chiefs of Staff, was asked whether the U.S. military was considering helping Turkey in the event that it went after the rebel Kurdistan Workers' Party, or PKK, in northern Iraq.

"It would be inappropriate for me from this standpoint to say we are ruling out or ruling in specific military options," Ham said. He said Gen. David Petraeus, the top U.S. commander in Iraq, and other commanders are watching the situation closely.

"I don't know specifically what they are planning to do if this matter continues to evolve," Ham said.

He also said that because there is only one principal overland route from Turkey into northern Iraq for transporting military supplies, a Turkish land offensive southward would have "a significant effect" on the U.S. military's ability to resupply its forces in northern Iraq.