Piracy off Somalia jumped up because an Islamic group that had cracked down on pirates was ousted. 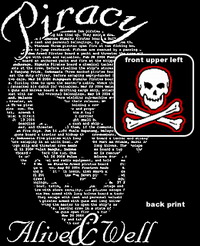 Attacks rose rapidly in Somalia to 26 reported cases, up from only 8 a year earlier, the International Maritime Bureau said in its report. Some hijackings have turned deadly - pirates complaining their demands had not been met killed a crew member a month after seizing a Taiwan-flagged fishing vessel in May off the northeastern coast of Somalia.

Somali pirates even targeted vessels on humanitarian missions, such as the MV Rozen that was hijacked in February soon after it had delivered food aid to northeastern Somalia. The ship and its crew were released in April, but the World Food Program has been forced to rely on more expensive air deliveries of food aid to Somalia.

Somalia has had 16 years of violence and anarchy, and now is led by a government battling to establish authority even in the capital, and challenged by an Islamic insurgency. Its coasts are virtually unpoliced.

During the six months that an Islamic group known as the Council of Islamic Courts ruled most of southern Somalia, where Somali pirates are based, piracy abated, said Andrew Mwangura, the program coordinator of the Seafarers Assistance Program.

At one point, the group announced it was sending scores of fighters with pickups mounted with machine-guns and anti-aircraft guns to central Somali regions to crack down on pirates based there. Islamic fighters even stormed a hijacked, UAE-registered ship and recaptured it after a gun battle in which pirates - but no crew members - were reportedly wounded.

"So it seems as if some elements within the Somali transitional federal government and some businessmen in Puntland (a northeastern Somalia region) are involved because you know piracy is a lucrative business," Mwangura told The Associated Press.

Somali government officials did not immediately respond to requests for comment.

Nigeria suffered 26 pirate attacks so far this year, up from 9 previously.

Babalola said the Navy has only 15 patrol boats for the Rivers and Delta states, but there are hundreds of waterways where pirates can attack.

"That makes it impossible to cover all these places," he told The Associated Press.

IMB director Pottengal Mukundan urged ships to stay as far as possible from the coasts of Somalia and Nigeria.

"The level of violence in high risk areas remain unacceptable. Pirates in Somalia are operating with impunity, seizing vessels hundreds of miles off the coast and holding the vessel and crew to ransom, making no attempt to hide their activity," he said.

Mwangura said ransoms of hundreds of thousands of dollars have been paid to secure the release of a number of the vessels hijacked this year and part of the money is, "paid through bank accounts of individuals in (Kenyan cities) Nairobi and Mombasa."

He said individuals who negotiated the release of some of the vessels gave him the information, adding that the companies that owned the vessels did not directly pay the ransoms, but risk management companies they hired did so.

In its report, the International Maritime Bureau said that while Africa remains a troubled area, Southeast Asia's Malacca Strait, one of the world's busiest waterways, has been relatively quiet.

A total of 198 attacks on ships were reported between January and September this year, up from 174 in the same period in 2006, the International Maritime Bureau said.

It said a total of 15 vessels were hijacked, 63 crew kidnapped and three killed.

In the July to September period alone, there were 72 incidents, up from 47 in the same period a year earlier, marking the second straight quarterly rise in attacks, the London-based IMB said through its piracy reporting center in Kuala Lumpur, Malaysia.

"If this current trend continues, it would appear that the decline in piracy attacks since 2004 has bottomed out," it said.

Indonesia remained the world's worst piracy hotspot, with 37 attacks in the first nine months of 2007 - but that was an improvement from 40 in the same period a year earlier, the IMB said.