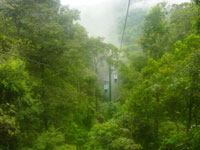 President Bharrat Jagdeo made the proposal Monday at the opening of a three-day conference on climate change attended by delegates of more than 50 former British colonies. He did not say how much compensation the South American government would request.

Jagdeo said he first made the offer last year to then-British Prime Minister Tony Blair, but said he is prepared to work with any nation or group that shares the country's vision for sustainable development.

"I outlined our offer to deploy almost our entire rain forest, which is the size of England, in the long-term service of the world's battle against climate change," Jagdeo said.

Under the proposed plan, Agriculture Minister Robert Persaud said the government would honor existing timber concessions but would not sign new contracts.

Large sections of the forest are already under protected status in Guyana, which includes part of the Guiana Shield - an area of Amazon forest stretching across international borders that contains more than 25 percent of the world's remaining humid tropical forests.