The new leader of Romania's Orthodox Church, Patriarch Daniel, is innocent of having been a Securitate collaborator. He was cleared because the files about him had been destroyed during the 1989 anti-communist insurrection. 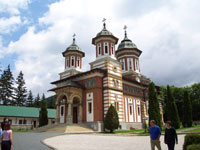 Mircea Dinescu, one of the representatives of the Council for Study of the Securitate Archives, which is examining the files of the feared communist-era secret police, said that the council had examined the cases of 25 senior Orthodox clergy.

Some were found to be innocent while others had had their files classified by the foreign espionage service in 1989 - indicating but not proving that they had worked for the Securitate and continued to work for the intelligence services after the fall of communism. In the absence of his files, which were burned during the revolt, Daniel was cleared.

Dinescu said Daniel, who was elected patriarch last month, had been invited to speak to the council but had not responded. Some priests have addressed the council about their records, while other have publicly refused to do so.

There has been no word from the Romanian Orthodox Church on Daniel's past.

The council voted Tuesday that Bishop Calinic of Arges had been a Securitate collaborator. He is the latest senior cleric to have been declared a collaborator. Last week Bishop Pimen, long considered a vocal opponent of communism, was named as a collaborator.

The Romanian Orthodox Church, to which more than 80 percent of Romanians belong, has said that collaboration with the Securitate should be considered an internal matter rather then an issue of public debate.

During Communism, thousands of priests were imprisoned or sent to labor camps, alongside tens of thousands of other political prisoners. Many signed pledges promising to be Securitate informants when they were released.