Reporters Without Borders released a list of the world's violators of media freedom. The worst media violators are Eritrea, North Korea and Turkmenistan. 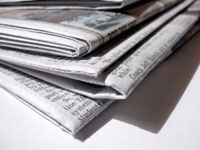 Northern European nations Iceland, Norway and Estonia topped the list, deemed the places where journalists have the most liberty.

The United States gained ground slightly for the first time since Reporters Without Borders began compiling the list five years ago, coming in at No. 48, behind Nicaragua and Cyprus.

Repressive governments are increasingly targeting bloggers, the group said, noting that at least 64 people are currently imprisoned worldwide because of what they posted on the Internet. Most are in China, ranked 163rd in a list of 169 nations.

War was a key reason for violations of media freedoms, the group said, noting hostage-takings in the Palestinian territories and fighting in Somalia and Sri Lanka that hurt their rankings.

It was the first time Eritrea had reached the bottom spot on the list, compiled by the Paris-based media watchdog and its network of more than 100 correspondents, legal experts and human rights activists worldwide.

"Eritrea deserves to be at the bottom," the group said in a statement. "The privately owned press has been banished by the authoritarian President Issaias Afeworki and the few journalists who dare to criticize the regime are sent off to prison camps."

It noted that four imprisoned journalists in Eritrea, a tiny Horn of Africa nation, have died in detention.

The group expressed alarm at worsening conditions in Myanmar, where the ruling junta has cracked down on opposition demonstrations led by Buddhist monks.

In the index's first year, 2002, the United States was in 17th place, but steadily declined in ensuing years because of limits on journalists linked to the war in Iraq and anti-terrorism policies. Last year it was at No. 53.

Media freedom has not improved in Russia, ranked 144th, RSF said, blaming failure to punish those responsible for murdering journalists and limited diversity in the media.

The group welcomed overall improvement in media rights in the world's rich democracies, including France and Japan, but noted that only two members of the G-8 - Canada and Germany - were in the list's top 20.