Condoleezza Rice, U.S. Secretary of State, tries to find support from Egypt to make Palestine and Israel close together. She said a Mideast peace conference is supposed to be held in November or December. 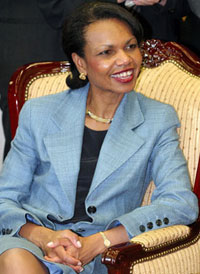 "I do think the prospect of the meeting has given them (the Palestinians and Israelis) some momentum in the document that they are trying to forge," Condoleezza Rice announced at a news conference.

She said the parties "will be in a position soon to determine when the meeting will take place" and said they were working within a November or December timeframe for the meeting in Annapolis, Md., in the United States.

But Egyptian Foreign Minister Ahmed Aboul Gheit said the meeting should not take place until the two sides are ready to launch negotiations.

"If we need more time to achieve that objective, so be it. If we are short of time, let's extend the time frame," Aboul Gheit said, standing next to Rice.

Palestinian and Israeli negotiating teams met for a second time on Monday to try to thrash out details of a joint document they are trying to forge before the hoped-for conference.

On Tuesday, Palestinian negotiator Yasser Abed Rabbo said, "So far, no advances have been made, and we are not deluding ourselves."