The British police team shot down a Brazilian man after mistaking him for a terrorist suspect. The leader of the team defended his officers at a court hearing. During the hearing he broke down in tears. 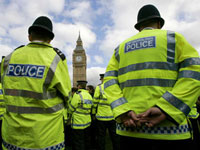 The officer, codenamed Ralph to protect his identity, told London's Central Criminal Court that despite what happened to Brazilian Jean Charles de Menezes, he was very proud of his team of officers.

Ralph said police had been prepared to risk their lives pursuing the man they believed was a suicide bomber into the London subway system.

The officer was giving evidence at the trial of London's Metropolitan Police force, which has pleaded not guilty to breaching health and safety laws in the lead up to de Menezes' death.

On July 22, 2005, police followed de Menezes, 27, into London's Stockwell subway station from an apartment that had been linked to a failed suicide bomber, and shot the Brazilian seven times in the head on a train.

The chase and shooting occurred one day after a group of would-be suicide bombers botched an attack on London's transit system.

"We were going forward to deal with this in order to protect the public, even though this man could have had a device on him," Ralph told the court.

Defense lawyer Ronald Thwaites also read from a statement by Ralph, in which he said that the police officers believed they were risking their lives to protect the public.

"I hope that's not forgotten," the statement said.

When Thwaites asked Ralph how he felt about being called as a witness by the prosecution, the officer, who was giving evidence from behind a screen, choked with emotion and was given a box of tissues by the court usher.

Judge Richard Henriques said: "I think the response speaks for itself."

Ralph said of his fellow officers: "Despite the outcome, I was very proud of them."

Prosecutors say police killed de Menezes and put the lives of others at risk during their anti-terrorism operation because of flawed planning and chaos at headquarters.

Police dispute the charge, saying de Menezes' killing was an error, not a crime.