The President of Syria Bashar Assad started an official visit to Turkey. He said that he was trying to act as a mediator between Syria and Israel. 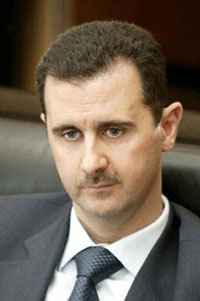 Assad's visit comes several weeks after battle planes attacked the unknown target in northeastern Syria near Turkey. Syria denied that it was a nascent nuclear facility.

Turkey complained to Israel about the Sept. 6 strike because the aircraft dropped fuel tanks on its territory during the incursion. Assad has said the planes struck an empty warehouse, but both Syria and Israel have been unusually silent over the incident.

Last week, Assad said in interviews with two Tunisian newspapers that Turkey was trying to mediate between Syria and Israel. Turkey has close ties to Israel.

"We have told them (The Turks) that our stance toward peace does not change. All we want is a clear declaration by Israeli officials of their desire for peace and the return of (occupied) land to Syria," Assad said.

Syria's state news agency SANA said Assad was leaving on Tuesday for Turkey for talks on "regional issues of common interest." It did not specify when during the day he was traveling. His last visit to Turkey was in January 2004.

SANA said Turkey and Syria have a common goal of insuring stability in the region, "which is passing through a very delicate stage and is facing a lot of problems, mainly the situation in Iraq, the Palestinian issue and the Israeli occupation of Arab lands."

Turkey and Syria have been increasing economic ties in recent years, with Turkey becoming the biggest foreign investor in Syria, according to SANA. More than 30 Turkish investment projects in Syria worth $150 million _ mostly industrial projects _ have been approved over the past two years, SANA said. Trade between the two countries increased from $257 million in 1992 to $635 million in 2004.