The New York bride, Elana Glatt, was upset. Her wedding was perfect, except the color of flowers. She sued the florist and alleged breach of contract. 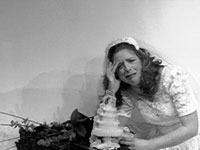 She says Posy Floral Design in Manhattan substituted pastel pink and green hydrangeas for the dark rust and green ones she had specified for 22 centerpieces.

"The use of predominantly pastel centerpieces had a significant impact on the look of the room and was entirely inconsistent with the vision the plaintiffs had bargained for," Glatt, a lawyer, said in the lawsuit, filed on behalf of herself, her husband, David, and her mother-in-law, Tobi Glatt, who paid for the flowers.

Stamos Arakas, the florist, said that he and his wife, Paula, tried to match the color of the hydrangeas with a picture Glatt had given them, but explained to her that the colors might not look the same.

"My father used to tell me, 'Don't deal with the lawyers," Arakas said. "Maybe he was right, God bless his soul."