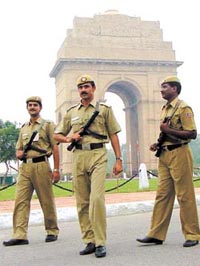 Ten Indian policemen were convicted of murdering two businessmen who were killed ten years ago in a hail of bullets, officials said.

The policemen claimed during the trial they had opened fire on the businessmen in self-defense as shots fired from inside their car had wounded a policeman.

The trial has garnered attention in India where there has been a growing number of cases of trigger-happy police killing unarmed suspects or innocent people, or faking shootouts, in a bid to earn promotions and rewards.

Prosecutors said police shot at Pradeep Goel and Jagjit Singh 38 times as they drove through the Indian capital's upscale Connaught Place shopping area in March 1997, mistaking them for gangsters they were chasing. The businessmen were driving a similar car.

"All the charges against you stand proved," Kumar said in his judgment, which also held the officers guilty of tampering with ballistic reports and attempting to cover up their mistake.

Critics say the killings are the symptoms of a system riddled with poorly trained, corrupt policeman, dirty politicians and stagnated courts where justice, if it ever comes, can be delayed for years.

The 10 officers, who have been out on bail for the last seven years, face the death penalty when sentences are handed out on Oct 24.

The shootings sparked public outrage, causing the federal Central Bureau of Investigation to step in and take over the investigation.

"It was a case of mistaken identity. But policemen should have been very careful," T. R. Kakkar, a former New Delhi police commissioner, told reporters after the verdict. Kakkar had supervised the investigation into the case for New Delhi police.