Lines cause argument in British Parliament

A great political conflict burst out between lawmakers and staff in the British Parliament, cutting across two national subjects: privilege and waiting in lines. 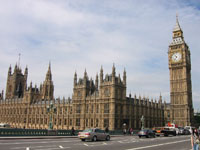 Lines cause argument in British Parliament

British lawmakers granted themselves powers to cut in front of staff at restaurants, restrooms and elevators - enraging aides, secretaries, chefs and janitors alike. The home of Britain's Parliament is in danger of appearing decidedly undemocratic, workers have warned.

"People are outraged," said Kevin Flack, an aide and labor union representative. "They are shocked by the attitude behind it as much as anything."

Flack, one of around 10,000 workers at the site, said staff feel they are being ranked as second-class citizens by elected members. Flack and workers' representatives are meeting Tuesday, with lawmakers hoping to persuade them to scrap the change.

Legislators sitting on the House of Commons administration committee also backed the ruling, prompting signs to be hung in cafes and restaurants reminding staff to give lawmakers priority.

Circulated by e-mail and in a memo, the directive tells staff to allow extra time to post mail or collect lunch at times when Parliament's services are likely to be in high demand from lawmakers.

"At a time when Parliament is trying to bring itself into the modern world, this feels like a step back to ancient times," Flack said.

Legislator Lembit Opik, best known for his obsession with asteroid strikes and his pop star girlfriend, is backing their claim and has rallied the support of fellow lawmakers.

"This announcement serves to create a rigid two-tier system which is counter to an enlightened image of Parliament," Opik said in a motion reprimanding colleagues for allowing the changes.

There is "merit in a general presumption of equality," said Opik's statement, which had been signed by 68 other legislators early Tuesday.