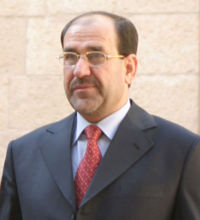 “High level” political and security team is to be sent to Turkey from Iraq to try to defuse tensions on the Iraqi-Turkish border, Premier Nouri al-Maliki said Tuesday.

A statement by his office said the decision was made after al-Maliki met with senior aides to discuss the crisis over a possible Turkish military incursion into northern Iraq in pursuit of separatist Kurdish guerrillas.

It did not say when the Iraqi delegation would leave for Ankara, where Iraqi Vice President Tariq al-Hashemi arrived earlier Tuesday for talks with Turkish leaders over the border issue.

"The Iraqi government will send a high-level political and security delegation to Turkey to deal with the recent security developments on the two nations' common borders," said the statement, which came one day after al-Maliki announced he was prepared to hold urgent talks with the Turkish government over the issue.

"The Iraqi government ... reiterates its commitment to ban terrorist activities carried out by the Kurdistan Workers' Party against neighboring Turkey."

The PKK, the group's Kurdish acronym, has been fighting the Turkish government since 1984 in a conflict that has claimed tens of thousands of lives.