A U.N. war crimes prosecutor reported that it was disinclined to hunt down Gen. Ratko Mladic and three other fugitives. It was a great surprise for Serbia. 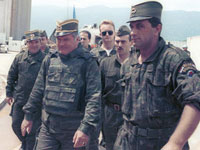 Serbia's full cooperation with the U.N. war crimes tribunal for former Yugoslavia is mandatory before the European Union signs an aid-and-trade pre-membership deal with the Balkan nation.

The chief U.N. war crimes prosecutor for former Yugoslavia, Carla Del Ponte, told EU ministers Monday that Serbia's cooperation was too slow and insufficient. She said she was convinced Serbia had the means to find and arrest the fugitives.

Serbia "did not expect the report to be so negative," he said, adding that authorities were doing all they could to arrest the fugitives.

Milos Aligrudic, an official of the ruling Democratic Party of Serbia, said the decision to postpone the signing sent a "wrong message."

"We cannot guarantee that any of the suspects will be arrested anytime soon, but what we are trying to do is to convince (the EU) that we are doing everything we can to cooperate" with the U.N. tribunal.

Sutanovac said he was convinced that Mladic - a Bosnian Serb wartime military commander charged with genocide during the 1992-95 Bosnian War - was not hiding in military barracks in Serbia, as claimed by some Western intelligence officials.

Sutanovac did not rule out, however, that Mladic was being sheltered by individuals from the Serbian army. Mladic was last reported to be in Belgrade in January 2006.

Serbia's government on Friday offered a €1 million (US$1.4 million) reward for information leading to the capture of Mladic and wartime Bosnian Serb political leader Radovan Karadzic.

Mladic and Karadzic are accused of orchestrating the 1995 massacre of up to 8,000 Muslim boys and men from Srebrenica - Europe's worst atrocity since World War II - and besieging the Bosnian capital, Sarajevo, for three years.

The other two fugitives believed hiding in Serbia are Goran Hadzic, a former leader of rebel Croatian Serbs, and Stojan Zupljanin, a wartime commander of Bosnian Serb police.