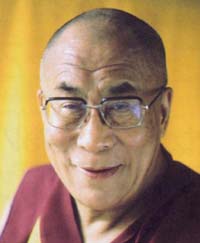 It’s expected that when President George W. Bush and the U.S. Congress rewarded the Dalai Lama it would stir China’s anger.

While the Dalai Lama is lauded in much of the world as a figure of moral authority, Beijing reviles the 1989 Nobel Peace Prize laureate and claims he is seeking to destroy China's sovereignty by pushing for independence for Tibet, where the Dalai Lama is considered a god-king.

China warns that a planned White House meeting Tuesday between Bush and the Dalai Lama and a public ceremony Wednesday to award the spiritual leader the prestigious Congressional Gold Medal are bad for U.S.-Chinese ties.

The Dalai Lama's special envoy, Lodi Gyari, said the president of the United States standing side by side with the Dalai Lama at the ceremony will send a clear message that "people do care about Tibet. We have not been forgotten."

"I have no doubt this will give tremendous encouragement and hope to the Tibetan people," he told reporters ahead of the visit. It also "sends a powerful message to China that the Dalai Lama is not going to go away."

The Dalai Lama says he wants "real autonomy," not independence, for Tibet. But China demonizes the spiritual leader and believes the United States is honoring a separatist. The Dalai Lama's U.S. visit comes as China is holding its important Communist Party congress.

Chinese diplomats have worked doggedly since the congressional award was voted on last year to get the ceremony and meeting with Bush scrapped and to "correct this mistake," said Wang Baodong, spokesman for the Chinese Embassy in Washington.

"We are certainly very much displeasured and regret the fact that the U.S. side would totally ignore the repeated positions of the Chinese side and go ahead with its erroneous decision," Wang said in an interview. "Such moves on the U.S. side are not a good thing for the bilateral relationship."

In Beijing, a government official on Tuesday also criticized the U.S. plans.

"The move will seriously damage China-U.S. relations," Foreign Ministry spokesman Liu Jianchao said. Liu did not specify how relations would be damaged if the award does take place.

He told a regular news conference that China hoped the U.S. would "correct its mistakes and cancel relevant arrangements and stop interfering in the internal affairs of China."

A State Department official said Monday that China is protesting U.S. honors for the Dalai Lama by pulling out of an international strategy session on Iran sought by the United States and planned for Wednesday.

China objected to participating in the meeting on the day that the Buddhist leader is to receive the congressional honor, said the U.S. official, who spoke on condition of anonymity to describe another country's motives.

Wang, the Chinese Embassy spokesman. did not directly dispute the U.S. depiction, but said that the date for the Iran meeting was "not suitable" for the Chinese delegation.

Congress has long championed the Dalai Lama; lawmakers also regularly criticize Beijing for human rights abuses and a massive military buildup and claim that China ignores abuse by unsavory foreign regimes in Sudan and Myanmar in its pursuit of energy and business deals.

The Bush administration also finds fault with China but is usually more measured as it seeks to manage a booming trade relationship and a desire to enlist Chinese cooperation on nuclear standoffs with North Korea and Iran.

Bush has met several times privately with the Dalai Lama, and, analysts say, his decision to attend the public congressional ceremony reflects his concern over the situation in Tibet.

Judith Shapiro, a China author and professor at American University, says the visit is "not going to profoundly affect ties in either direction. China needs the U.S., the U.S. needs China, and issues like Tibet are a bit of a sideshow to the basic relationship."

On Monday, dozens of people, some dressed in brightly colored traditional Tibetan robes and hats, greeted the Dalai Lama at a downtown Washington hotel. The Dalai Lama gave his blessing to people in the crowd and tasted some rice that had been prepared for him.

Wednesday's award ceremony marks the second time in a week that congressional action has had foreign policy implications.

A U.S. House of Representatives panel last week approved a nonbinding resolution declaring World-War I-era mass killings of Armenians in Turkey a genocide. The Bush administration has been lobbying intensely to persuade lawmakers to reject the resolution, which Bush believes would harm relations with Turkey.

In the Dalai Lama's case, Bush supports the visit, although the White House tried to ameliorate Chinese anger before the Tibetan spiritual leader's arrival. Bush told Chinese President Hu Jintao at a recent meeting that he would be welcoming the Dalai Lama to Washington.

White House spokeswoman Dana Perino recently told reporters that Bush "understands that the Chinese have concerns about this."

"We would hope that the Chinese leader would get to know the Dalai Lama as the president sees him - as a spiritual leader and someone who wants peace," she said.

The Dalai Lama is immensely popular in Tibet, which China has ruled with a heavy hand since its communist-led forces invaded in 1951. He has been based in India since fleeing his Himalayan homeland in 1959 amid a failed uprising against Chinese rule.