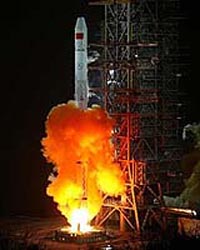 Chinese newspapers reported Tuesday that the country would launch its first lunar probe later that month.

The Beijing Evening News said the Chang'e 1 orbiter would be launched from the Xichang Satellite Launch Center on Oct. 24 at 6 p.m.

The Shanghai Morning Post reported the launch would take place from Oct. 22 to Oct. 25.

The launch comes after Japan's space agency said nearly two weeks ago that its probe was in high orbit over the moon and all was going well as it began a yearlong project to map and study the lunar surface.

"Preparations for the moon-orbiting project have gone well and the launch will be made at the end of October," Zhang Qingwei, director of State Commission of Science, Technology and Industry for National Defense, was quoted as saying Tuesday by the official Xinhua News Agency.

The Chang'e 1 orbiter will use stereo cameras and X-ray spectrometers to map three-dimensional images of the lunar surface and study its dust, Xinhua has reported previously.

Zhang said the satellite is now at the launching field, and the test work has been completed.

China sent shock waves through the region in 2003, when it became the first Asian country to put its own astronauts into space. This year, China also blasted an old satellite into oblivion with a land-based anti-satellite missile, the first such test ever conducted by any nation, including the United States and Russia.

The regional space rivalry is likely to be joined soon by India, which plans to launch a lunar probe in April.