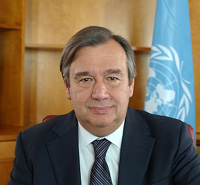 If Turkey breaks into Northern Iraq it will exacerbate what is already the Middle's East's worst refugee crisis since the 1940s, the head of the United Nation's refugee agency expressed said Tuesday.

"I can only express our very deep concern about any development that might lead to meaningful displacements of populations in that sensitive area," said Antonio Guterres, the U.N. high commissioner for refugees.

On a visit to the European Union, he also urged western nations to help Syria and Jordan cope with an already huge influx of Iraqi refugees and appealed to the EU not to close its borders to Iraqi asylum seekers.

"The northern governates, or Kurdistan, or whatever you want to call that area has been the most stable area in Iraq," Guterres told reporters.

"It is an area also where you will find Iraqis from the south and from central Iraq that went there to seek security, and of course we strongly hope that this relative security in Kurdistan will not be affected."

The Turkish government on Monday asked parliament to approve a military campaign in northern Iraq against the rebel Kurdistan Workers' Party.

The Parliament is expected to grant the approval soon, although government officials say Turkey may still hold off on an attack, possibly to see if the United States and Iraq attempt to crack down on the rebels.

Guterres said the region was already struggling to handle the mass flight from the violence in Iraq.

"Syria and Jordan have been hosting a huge number of refugees - 1.3 million to 1.4 million in Syria, more than half a million in Jordan," he said. "This has corresponded to a huge negative impact on their economies and their society."

He said schools, hospitals and utilities such as water and electricity in Jordan and Syria risk being overwhelmed by the influx and were in dire need of outside help.

"These countries have done it with a very small support from the international community," he said. "If international solidarity does not express itself in a meaningful way, the risk of asylum fatigue in the area is of course enormous."

Syria has recently imposed new rules to stem the flow of Iraqis, and Guterres also complained that Iraqi authorities were also restricting movement within the country.

"We are very worried with the fact that movement is becoming even more difficult inside Iraq - several governates putting restrictions on people moving from one governate to another - and that access to the outside world is also becoming more and more restricted," he said. "That adds to the huge level of suffering."

Guterres also appealed for the EU to keep its doors open to Iraqi refugees.