Armenia should be punished over US genocide resolution 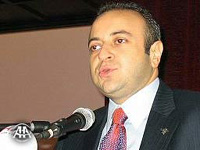 Armenia should be punished over US genocide resolution

The U.S. administration should not be punished for its solution to call the World War I-era killings of Armenians a genocide, but there must be sanctions against Armenia, who supported the decision, a top Turkish official said Tuesday.

A U.S. House of Representatives panel approved a resolution last week labeling the killings as genocide, an affront to Turks who deny any systematic campaign to eliminate Armenians at that time.

"Bush and his team should not be punished," Egemen Bagis, a foreign policy adviser to Turkish Prime Minister Recep Tayyip Erdogan, said on CNN-Turk television. "The reaction should be against Pelosi and her team."

Bagis noted that U.S. Secretary of State Condoleezza Rice and Defense Secretary Robert Gates had lobbied against the measure.

In a televised speech on Tuesday, Erdogan compared the resolution to a "summary execution."

"Nobody has the right to judge Turkey like this," Erdogan said. "Those who dare confront an important country like Turkey will pay the price."

Bagis said Turkey should impose sanctions against Armenia because it supported the resolution.

"Turkey must impose sanctions against Armenia," Bagis said. "Turkey has already done a list of what and when it will do, and the prime minister has already given necessary orders."

The border between Turkey and Armenia is closed. But Turkey could cancel flights between Istanbul and Yerevan, as well as stopover flights to Armenia, and also prevent around 4,000 trucks from hauling goods to Armenia through neighboring Georgia.

U.S. officials have said they feared Turkey, a cargo hub for U.S. forces in Iraq, could retaliate by curbing the flow of fuel and other supplies to American bases.

Bagis said Erdogan should go ahead with a planned meeting next month with Bush in the United States.

"The prime minister should meet Bush and try to record progress on issues where the administration can help," Bagis said.