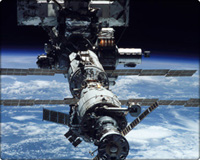 China would like to become part of an international space station project, already including Russia and the United States.

China takes great pride in its burgeoning space program and sees it as a way to validate its claims to be one of the world's leading scientific nations.

"We hope to take part in activities related to the international space station," Li Xueyong, a vice minister of science and technology. "If I am not mistaken, this program has 16 countries currently involved and we hope to be the 17th partner."

China doesn't participate in the International Space Station, due in part to American unease about allowing a communist dictatorship a place aboard.

A reporter had asked whether China in the future would be more likely to compete or cooperate with America in space. Li said China wanted to cooperate with the United States, but didn't give any other specifics.

In 2003, China launched its first manned space mission, making it the third country to send a human into orbit on its own, after Russia and the United States.

But China also alarmed the international community in January when it blasted an old satellite into oblivion with a land-based anti-satellite missile. It was the first such test ever conducted by any nation, including the United States and Russia.

That test was widely criticized for its military implications. A similar rocket could be used to shoot military satellites out of space, and create a dangerous haze of space debris.

Beijing insists however that it is committed to the peaceful use of space - a stance that Li reiterated on Tuesday.

"The Chinese government has always pursued a foreign policy of peace and consistently worked for the peaceful use of outer space," he said during a briefing about China's development of science and education on the sidelines of a key Communist Party Congress.

The space station's first section was launched in 1998 and it has been inhabited continuously since 2000 by Russian, U.S. and European crew mates.

Countries now participating in the project include the United States, Canada, Russia and Japan, plus 11 other nations who take part through the European Space Agency. Brazil signed a separate agreement with the U.S. to provide equipment.