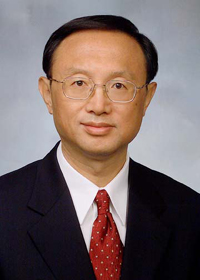 Americans should give up their plan to reward Dalai Lama if they do not want their relations with China to be damaged seriously.

The Dalai Lama was scheduled to meet U.S. President George W. Bush at the White House later Tuesday, one day before a public ceremony to award the 1989 Nobel Peace Prize laureate the Congressional Gold Medal. The award is the Congress' highest civilian honor.

"We solemnly demand that the U.S. cancel the extremely wrong arrangements," Chinese Foreign Minister Yang Jieche told reporters. "It seriously violates the norm of international relations and seriously wounded the feelings of the Chinese people and interfered with China's internal affairs."

Spokesman Liu Jianchao told a regular news conference that China hoped the United States would "correct its mistakes and cancel relevant arrangements and stop interfering in the internal affairs of China by any means."

The Dalai Lama has been based in India since fleeing his Himalayan homeland in 1959 amid a failed uprising against Chinese rule. He remains immensely popular among Tibetans, despite persistent efforts to demonize him by Beijing, which claims he is seeking to destroy China's sovereignty by pushing for independence for Tibet.

The Dalai Lama insists he wants "real autonomy," not independence for the region, which the mainland claims has been its territory for centuries.

The comments by the Chinese officials were the latest in a string of protests about the award. "The Chinese have raised the issue with the ambassador on several occasions," said Susan Stevenson, a spokeswoman for the U.S. Embassy in Beijing.

The planned ceremony for the Dalai Lama comes at a sensitive time in Chinese politics. More than 2,000 of the country's top Communists have gathered in Beijing for a once-every-five-years meeting to decide the country's policy agenda and elect top leaders.

Liu did not say how relations would be damaged if the award does take place. He denied that China pulled out of a planned international strategy session on Iran sought by the U.S. to protest the award.

"I believe I made it quite clear that due to technical reasons, China will not attend the meeting due to be held on the 17th," Liu said. "I'd like to point out that China's stance on the Iranian nuclear issue remains unchanged."

A U.S. State Department official said Monday that China objected to participating in the meeting on the same day the Dalai Lama is to be honored.

China is one of six nations that have offered Iran a deal to shutter disputed nuclear activities, and Wednesday's meeting in Berlin was part of the U.S.-led drive to punish Iran for spurning the offer.

The six-nation diplomatic meeting is still expected to take place, perhaps a week later, said the U.S. official who spoke on condition of anonymity. Liu said the six countries still need to agree on a new meeting date.

Foreign leaders have grown increasingly willing to risk Beijing's wrath to underscore concerns for human rights in Tibet, which China has ruled with a heavy hand since communist forces invaded in 1951.