India's prime minister has raised doubts about a landmark nuclear energy accord with the United States, telling U.S. President George Bush that his government was having trouble finalizing the deal. 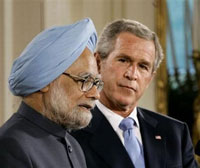 The pact has been billed as a new partnership between India and United States after decades of icy relations, and Washington is widely perceived to have made biggest concessions to make the pact acceptable to New Delhi.

Opposition in India has nonetheless mounted in the months since the two sides finalized the deal's technical aspects, with communist parties that are key to the survival of Prime Minister Manmohan Singh's government arguing against closer ties to the United States.

The feud had grown increasingly acrimonious in recent weeks and there was widespread speculation about early elections until Friday, when Singh stepped back from the confrontation by saying it was "not the end of life" if the deal didn't go through.

The doubts raised by that statement were further magnified late Monday, when Singh told Bush that "certain difficulties have arisen with respect to the operationalization" of the deal, according to a statement from the prime minister's office. Singh, who is on a trip to Africa, spoke to Bush by telephone from Abuja, Nigeria.

The deal would reverse three decades of American anti-proliferation policy by allowing the U.S. to send nuclear fuel and technology to India, which has been cut off from the global atomic trade by its refusal to sign nonproliferation treaties and its testing of nuclear weapons. In exchange, India would separate its military and civilian reactors, and place the civilian ones under international inspections.

Bush and Singh have sold the deal, first conceived in July 2005, as a way to bring India - a nuclear weapons state - into the international atomic mainstream. They've also touted its benefits for India's booming but energy-starved economy, which would gain access to much-needed atomic fuel and technologies.

Despite the challenges to the deal in India, U.S. officials have remained publicly upbeat about its prospects, not wanting to further roil India's already turbulent political scene.

But U.S. officials say privately that frustration with India is growing, and that with America heading into an election year, India needs to press ahead with the next steps in enacting the deal, which must get a final nod from U.S. lawmakers.

It appears increasingly unlikely that Singh is willing - or even capable - of doing that.

The communists insist that Singh's government not take the next steps in finalizing the deal - negotiating separate agreements with the International Atomic Energy Agency and Nuclear Suppliers Group, a group of nations that export nuclear material - until Parliament debates the pact later this year.

Assuming Singh then gets to go-ahead to proceed - far from a sure thing - that would probably put off a final vote on the accord by American lawmakers until well into next year, if not longer, possibly delaying it to the point where it is no longer viable.

The deal faces opposition in the U.S. too, where critics, including some in Congress, say by providing fuel to India, the U.S. would free up India's limited domestic supplies of nuclear material for use in atomic weapons. That, they argue, could spark a nuclear arms race in Asia.