Leaders of Russia and Iran spoke out strongly Tuesday against outside interference into Caspian Sea affairs during a summit of the five nations bordering the inland sea that focused on ways to divide the region's substantial energy resources. 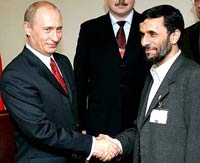 Russian President Vladimir Putin, whose trip to Tehran is the first by a Kremlin leader since World War II, warned that projects of energy pipeline crossing the Caspian could only be implemented if all five littoral nations support them.

Putin did not name any specific country, but his statement underlined Moscow's strong opposition to U.S.-backed efforts to build pipelines to deliver hydrocarbons to the West bypassing Russia.

"Projects that may inflict serious environmental damage to the region cannot be implemented without prior discussion by all five Caspian nations," he said.

Putin also emphasized the need for all Caspian nations to prohibit the use of their territory by any outside countries for use of military force against any nation in the region - a clear reference to long-standing rumors that the United States was planning to use the former Soviet republic as a staging ground for any possible military action against Iran.

Iranian President Mahmoud Ahmadinejad, meanwhile, also underlined the need to keep outsiders away from the Caspian.

"All Caspian nations agree on the main issue - that all aspects related to this sea must be settled exclusively by littoral nations," he said. "The Caspian Sea is an inland sea and it only belongs to the Caspian states, therefore only they are entitled to have their ships and military forces here."