Tornadoes kill at least three people, injuring about 85 others in Bangladesh 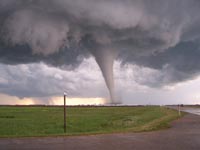 Tornadoes kill at least three people, injuring about 85 others in Bangladesh

The twisters swept through about 30 villages late Monday along the coast in the districts of Bhola and Bagherhat while most villagers were asleep, United News of Bangladesh reported.

Officials were not immediately available for comments.

Storms and floods are common in Bangladesh, a tropical delta nation of 144 million people.