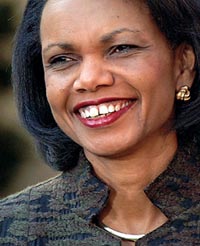 Ending the Israeli-Palestinian conflict is "one of the highest priorities of Bush’s administration," Condoleezza Rice said Monday.

An international peace conference expected to take place in Annapolis, Maryland, in the fall has to be serious and substantive, Rice said at a news conference with Palestinian President Mahmoud Abbas.

"We frankly have better things to do than invite people to Annapolis for a photo op," she said.

Israelis and Palestinians, Rice observed, are making their "most serious effort" in years to resolve the conflict.

"Frankly, it's time for the establishment of a Palestinian state," she added.

The two sides are trying to work out an outline for a final peace deal ahead of the Annapolis conference. But tensions arose on Sunday when Israeli Prime Minister Ehud Olmert told his Cabinet that he didn't regard that outline as a prerequisite for the conference to go ahead.

The Palestinians said that without such a document, they wouldn't attend the meeting.

Israel has been pushing for a vaguely worded document while the Palestinians want a detailed outline, complete with a timetable for establishing a Palestinian state.