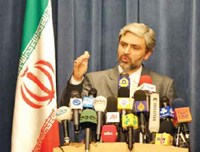 According to the earlier reports, Satoshi Nakamura, 23, is believed to have been abducted a week ago in southeastern Iran by a regional drug-smuggling group who demanded the release of detained members in exchange for Nakamura's freedom.

Foreign Ministry spokesman Mohammad Ali Hosseini denied that a deal would take place but said Iran was hopeful Nakamura would be released.

"Exchange and ransom is illegal. Law enforcement forces will handle the case base on the law," Hosseini told reporters.

"Iranian forces have applied plenty of efforts. we are hopeful to hear news of his release soon," he said.

On Sunday, the Japanese news agency Kyodo cited an unidentified Iranian government official as saying Nakamura could be released later that day. The agency said Japan's government has been seeking the Iranian government's cooperation in winning the man's release. It did not elaborate.

Nakamura's capture is the latest in a series of kidnappings in Iran's lawless southeast this year.

Bandits kidnapped 12 Iranians in August. Security forces from Pakistan, just across the border, succeeded in freeing the hostages after clashing with gunmen.

Iran has blamed kidnappings of foreigners in the area on criminals and drug smugglers, and has urged foreign visitors to be cautious when traveling there.

The region has also been hit by explosions targeting Iranian troops, blamed on militants of Iran's minority Sunni Muslim population. Tehran accuses the United States of backing the militants to destabilize the country.