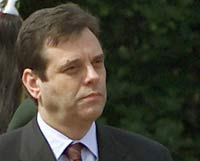 Serbia's Prime Minister Vojislav Kostunica has been re-elected the leader of his ruling Democratic Party of Serbia, the party said Monday.

Kostunica, who has led the party since it was formed in the early 1990s, was chosen late Sunday at a party assembly, the spokesman Andreja Mladenovic said. The re-election was a formality with nobody challenging the country's conservative leader.

Kostunica came to power in Serbia in 2000, replacing former strongman Slobodan Milosevic as president of what was then rump Yugoslavia.

Kostunica switched to the post of prime minister in 2004 and is currently serving his second term as head of government.