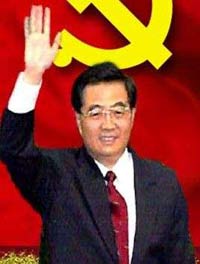 Opening a pivotal party congress that is seen as a major test of his political strength, Hu outlined policies intended to make China more prosperous and stable by raising incomes and improving the party's hold on a fast-changing society.

"Contemporary China is going through a wide-ranging and deep-going transformation. This brings us unprecedented opportunities as well as unprecedented challenges," Hu told the more than 2,200 delegates gathered in the Great Hall of the People for the once-every-five-year meeting.

In the far-ranging speech that lasted more than two hours and 20 minutes, Hu also promised to continue a buildup of China's military, emphasized Beijing's preference for a peaceful settlement with rival Taiwan, and pledged to use the country's economic and diplomatic clout as a force for peace internationally.

While the speech is the congress' most public event and provides a blueprint for upcoming policies, the meeting's chief purpose is to reappoint Hu for a second five-year term as party general secretary. A key measure of Hu's influence will be how many of his political allies he can maneuver into top party jobs, including protйgйs expected to take over from him when he steps down in five years.

In his report to the congress, Hu dwelled on his signature policy, a push to re-channel breakneck development by spreading the benefits of economic growth more evenly that goes by the rubric "the scientific outlook on development." Hu referred to the social divisions that have erupted from fast-growth, gaps between rich and poor, urban and rural and made an oblique reference to an emerging, demanding middle class.

"A relatively comfortable standard of living has been achieved for the people as a whole but the trend of a growing gap in incomes distribution has not been thoroughly reversed," Hu said. "There are still a considerable number of impoverished and low-income people in both urban and rural areas, and it has become more difficult to accommodate the interests of all sides."

While Hu spoke, police and soldiers who sealed off Tiananmen Square and the areas around the Great Hall of the People detained at least two dozen people, many of them elderly, forcing them into police vans. Many carried documents detailing grievances against local officials and hoped to get the attention of Chinese leaders.

"I'm willing to stand here as long as it takes. I don't know what happened to my sons," said Miao Yufeng, a farmer from nearby Hebei province who said her two sons were taken away by police without explanation a year ago. She was later taken away by police.

One remedy Hu called for was making the authoritarian governing structure more responsive without shaking the Communist Party's grip.

"In deepening political restructuring, we must keep to the correct political orientation," Hu said.

He said government advisory bodies that include nonparty members would be given a greater role in forming policies and called on local governments to hold public hearings before adopting regulations that impact people's lives. He urged greater transparency to root out the endemic corruption that has withered popular support for the party.

In looking outward, Hu reiterated an offer to end the hostilities between China and Taiwan since their separation amid civil war 58 years ago. Hu, however, restated a condition for talks that has been anathema to Taiwan's democratic government - that the island must recognize that it is a part of China.

Though the speech contained few new initiatives, it marks one of Hu's most important public addresses since becoming party leader in 2002. He reveled in the achievements China has made since he took over, pointedly referring to income growth and its two manned space missions.

Hu's leadership has never been threatened, but he is largely seen as weaker than past leaders, forcing him to compromise on some top appointments and other decisions. In a sign of possible constraints, Hu's retired predecessor, Jiang Zemin, was appointed to the committee handling the congress' arrangements, state media said Sunday.

Deliberations over the next leadership lineup have been going on for months and will take place this week behind closed doors. Its makeup is officially announced after the congress ends.

Hu is expected to push for the elevation of protege Li Keqiang onto the Politburo Standing Committee, while Xi Jinping, the party boss of Shanghai and the son of a revolutionary veteran, is also expected to get a seat.