Suicide terrorists prepared to assassinate Putin during his visit to Iran

An attempt on the life of Russian President Vladimir Putin can be possible made during his visit to Iran on October 15-16, sources from special services outside Russia said. Several groups of suicide bombers have been formed to carry out the assassination. 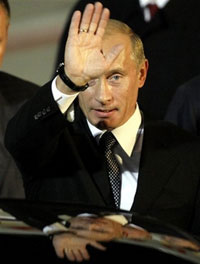 Suicide terrorists prepared to assassinate Putin during his visit to Iran

Putin is to make a short visit to Iran on October 15-16 to participate in the summit of the Caspian leaders (Russia, Azerbaijan, Turkmenistan, Kazakhstan and Iran).

The Kremlin press service confirmed the information and said that the president had been informed accordingly. It is not ruled out that Putin will eventually cancel his visit to Iran, although the final decision on the matter will be made on Oct. 15 after adequate consultations with Iranian special services.

An official spokesman for Iran’s Foreign Affairs ministry, Mohammad Ali Hosseini rejected the information about the possible assassination of Putin in Teheran, RIA Novosti reports. “This information is absolutely unfounded. Putin’s visit to Teheran will be conducted under normal conditions,” the Iranian official said Sunday. “This information is a part of the psychological war unleashed by Iran’s enemies, to cause damage to Russian-Iranian relations,” the diplomat added.

Putin’s trip to Iran will be the first visit of Russia’s head of state to this country in more than 60 years. Putin will also become the first leader of the Group of Eight to visit Iran. The Iranian nuclear program will reportedly become the key question on the agenda of the talks in Teheran. Russian president’s meeting with his Iranian colleague Mahmoud Ahmadinejad will exert a strong influence on the issues of global security, a spokesman for the Iranian Foreign Affairs Ministry said.

Officials have reported uncovering at least two other plots to kill Putin on foreign trips since he became president in 2000.

Russian officials linked both alleged plots to Chechen separatists. Putin had sent troops back into the southern Russian republic to crush resistance to Moscow's rule.