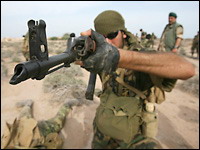 On Sunday, he questioned her sincerity.

Last month, Clinton was one of 75 U.S. senators who voted for a resolution giving President George W. Bush the authority to call the guards terrorists. She has characterized the vote as a way to gain leverage for U.S. negotiations with Iran, but some of her rivals, including Edwards and Sen. Barack Obama, argue it amounted to giving Bush another blank check to go to war.

At several stops Sunday, Edwards referred to a New York Times column in which unidentified Clinton supporters say she voted for the resolution in part because she already has shifted from "primary mode," when she must appeal to liberals, to "general election" mode, when she must find broader support.

"Instead of moving from primary mode to general election mode, why don't we have tell-the-truth mode, all the time, and not say something different one time than we say another time?" he said.

"We need to be able to trust both a presidential candidate and a president of the United States," Edwards said.

Democratic presidential hopefuls Sens. Joe Biden and Chris Dodd voted against the resolution. Obama missed the vote to campaign in New Hampshire, prompting Clinton's campaign to argue that if he felt so strongly that the resolution would lay the groundwork for war he should have been there to vote against it.