Bronze Door, the main entrance to the Apostolic Palace and the papal apartments, was blessed by Pope Benedict XVI. By tradition the Bronze Door is closed upon the death of a pontiff. 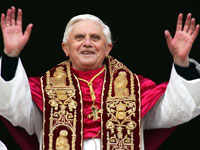 "It is my heartfelt wish that all those who enter through the Bronze Door may feel from the very beginning welcomed by the pope's embrace," he said during the inauguration ceremony. He was given a set of golden keys.

The massive pair of doors was removed two years ago and replaced with a copy. Officials said years of use had worn the bronze coating of the 25-foot-high doors and had weakened the original wood, raising fears that the six-ton structure could collapse.

"The doors were unstable," Pier Carlo Cuscianna, head of the Vatican's technical office explained to the pope at the ceremony.

Steel braces were implanted in the wood during the restoration to ensure safety.

The Bronze Door - with massive gilded handles - leads to the marble Scala Regia (Royal Staircase), climbed in past centuries by emperors and kings who sought an audience with the pope. It is guarded by two Swiss Guards dressed in blue and yellow Renaissance uniforms armed with halberds, and is still the principal entrance for pilgrims coming to see the pope. At night the door is closed.

Following Roman tradition, on the death of a pope one side of the door is closed, to symbolize that the head of the household is gone.

The sculptor Bernini placed the door in its present position atop a series of marble steps after a major restoration of St. Peter's Basilica in 1663.