Unemployment rate in Bulgaria lowers. In September it was 6.78 percent, a drop of 1.66 percent from the same month in a year ago. However the country's inflation rate rose. 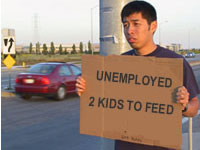 The jobless rate showed a continuation of the downward trend of the last few months, the National Employment Agency said in a statement, falling by 0.22 percent from August.

Consumer prices, the government said, rose 13.1 percent on the year in September, up from an 12 percent annual rate recorded in August.

Food prices accounted for most of the rise, increasing by 2.1 percent in September over August, the National Statistics Institute said. Prices of nonfood products increased by 1.3 percent, while prices for services dropped by 0.1 percent over the previous month.

Consumer prices in 2006 rose by 7.3 percent over the previous year, the institute said.

Bulgaria, a Balkan country of 7.7 million, joined the European Union in January.