US deploys missile-tracking system in Japan 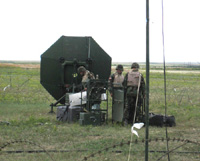 US deploys missile-tracking system in Japan

Japanese defense minister said Friday that the U.S. military deployed a mobile missile-tracking system in northern Japan on Friday – in a joint attempt to protect against the missile threat from North Korea.

It is the first mobile U.S. missile tracking system to be deployed in Japan.

Another ministry official, also talking on condition of anonymity, refused to say when the tracking system would come into operation, citing security.

The mobile missile-tracking system is designed to receive launch data from early warning satellites, analyze the projected destination of missiles and forward the information to the U.S. military and Japan's Defense Ministry.

Japan will conduct its first missile test in mid-December, from an Aegis-radar equipped destroyer off Hawaii, "to confirm its ballistic missile defense capability," the Defense Ministry said separately in a statement.

Japan deployed its first advanced U.S.-developed Patriot missiles earlier this year, and plans to introduce SM-3 interceptors on its destroyers in the next few years, including one in December.

The two countries held a regional ballistic missile defense drill in July. Another round of exercises is scheduled for November, followed by a test launch of the U.S.-developed SM-3 missile interceptor from Japan's Aegis-class destroyer Kongo during the week of Dec. 17 off a Hawaiian island of Kauai, the ministry said.

The U.S. keeps about 50,000 troops across Japan under the bilateral security pact.