Al Gore got the Nobel Peace Prize for his fight against global warming, fueling speculation. And now the former vice president wants to enter next year's presidential race. 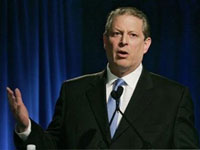 It is unlikely. Chances are that Gore will not risk his Nobel-burnished image and huge public platform with a return to the rough-and-tumble world of politics - at least not this year, advisers say.

"We face a true planetary emergency," Gore said in a statement shortly after winning the prize. "The climate crisis is not a political issue ..."

Actually, it is. Years after Gore adopted climate change as his signature issue, Democrats and Republicans alike now face the scientific certainty of global warming and a public that wants something done about it.

Nobody is better positioned than Gore to ride the issue to the White House.

Two Gore advisers, speaking on condition of anonymity because they are not authorized to share his thinking, said the award will not make it many more likely that he will seek the presidency. If anything, the Peace Prize makes the presidential race less appealing to Gore, they said, because now he has an international platform to fight global warming and may not want to do anything to diminish it.

One adviser said that while Gore is unlikely to rule out a presidential bid in the coming days, the prospects of the former vice president entering the fray in 2008 are "extremely remote."

For now, look for Gore to stick with his coy refrain: He has "no plans" to seek the presidency in 2008.

Plans, of course, can change.

"I've called Al Gore and urged him to run for president so many times," former President Jimmy Carter told NBC's "Today" show. "He finally told me the last time, 'President Carter, please do not call me."'

Carter added, "I can at least do it indirectly through the news media."

Also indirectly pressing Gore are scores of Internet-savvy supporters who are raising thousands of dollars for petition drives and advertising in an effort to lure him into the race. One group, Draftgore.com, ran a full-page open letter to Gore in Wednesday's New York Times, imploring him to enter the race.

Associates of Gore say the upsides of seeking the presidency are obvious to the former vice president:

- There is no better place to fight global warming than the Oval Office.

- He has the money (Internet stocks made him rich after leaving the White House), the following and name recognition needed to launch a serious campaign.

- He is not convinced that the current field is committed to the cause of global warming.

But he also knows that it is late in the cycle and the race has taken shape without him, advisers say. A losing or nasty political campaign could tarnish his carefully crafted image as a man above politics.

Finally, and perhaps most significantly, Gore never really had the stomach for tough political fights, associates say, which is one reason why he did not made the best candidate in 2000.

There is no doubt that Gore would not be welcomed by Democratic candidates, especially front-running Sen. Hillary Rodham Clinton - the former first lady who had a prickly relationship with Gore while they were in the White House. In the 1990s, the vice president and first lady vied for then-President Bill Clinton's political capital as they staked out their futures.

Asked by NBC this week if she expected to face Gore in the primary fight, Clinton said coolly, "You know, I think we've got great candidates running. We have a wonderful field."

She praised Gore for "sounding the alarms" on global change two decades ago. "I am so hoping that he wins the Nobel Prize," she said.