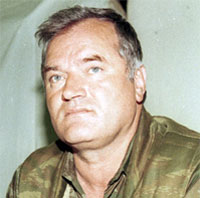 Rasim Ljajic, who is in charge of Serbia's cooperation with the U.N. war crimes tribunal, said authorities have also offered EUR250,000 (US$355,000) for the arrest of each of another two suspects believed hiding in Serbia.

The U.S. has already offered a US$5 million (EUR3.5 million) for information leading to the arrest of Mladic, who was the wartime Bosnia Serb army commander, or wartime Bosnian Serb political leader Radovan Karadzic.

Ljajic repeated claims that Karadzic was not hiding in Serbia, which is why he said the government did not officially offer money for his capture.

But he said Serbia's National Security Council - the body in charge of the search for war crimes fugitives - would grant EUR1 million to anyone who could reveal where Karadzic is hiding.

"The offered rewards are a demonstration that Belgrade is serious about capturing the remaining war crimes fugitives," Ljajic said.

Mladic and Karadzic are accused of orchestrating the 1995 massacre of up to 8,000 Muslim boys and men from Srebrenica - Europe's worst atrocity since World War II - and besieging the Bosnian capital, Sarajevo, for three years.

The other two fugitives believed hiding in Serbia are Goran Hadzic, a former leader of rebel Croatian Serbs, and Stojan Zupljanin, a wartime commander of Bosnian Serb police.

The chief U.N. war crimes prosecutor for former Yugoslavia, Carla Del Ponte, is to present her assessment of Serbia's cooperation with the tribunal later this month to EU officials, who will decide whether Serbia can sign a pre-membership aid and trade pact with the bloc.

EU officials have said the accord will remain on hold until Belgrade shows its full cooperation with the tribunal in The Hague, Netherlands.