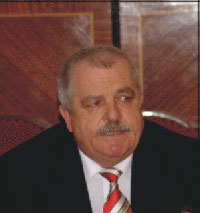 Just a day after the former agriculture minister resigned in Romania, Premier Calin Popescu Tariceanu named agricultural specialist in relations with the European Union as the new one.

Dacian Ciolos, 38, will replace Decebal Traian Remes who was forced to resign on Thursday, after prosecutors accused him of taking a bribe of EUR15,000 (US$21,000) and the promise of homemade sausages and plum brandy from former Agriculture Minister Ioan Muresan, who allegedly was acting on behalf of businessman Gheorghe Ciorba.

Prosecutors said the payment was meant to secure favor for Ciorba's firm in a public auction, however Ciorba reported the bribe to authorities before the auction took place.

Ciolos is not a member of the governing Liberal Party but supports the government, the statement said. He needs to be approved by President Traian Basescu, which is likely.