Former U.S. Vice President Al Gore and the U.N.'s Intergovernmental Panel on Climate Change won the 2007 Nobel Peace Prize Friday for their efforts to build up and disseminate knowledge about man-made climate change and to lay the foundations for fighting it. 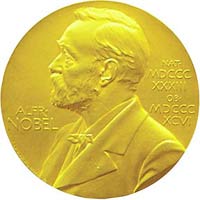 Gore, who won an Academy Award earlier this year for his film "An Inconvenient Truth," had been widely tipped to win the prize. The win is also likely add further fuel to a burgeoning movement in the United States that seeks to draft Gore to run for president in 2008, which he has so far said he does not plan to do.

"His strong commitment, reflected in political activity, lectures, films and books, has strengthened the struggle against climate change," the citation said. "He is probably the single individual who has done most to create greater worldwide understanding of the measures that need to be adopted."

It said that Gore "has for a long time been one of the world's leading environmentalist politicians" and cited his awareness at an early stage "of the climatic challenges the world is facing.

The committee cited the IPCC for its two decades of scientific reports that have "created an ever-broader informed consensus about the connection between human activities and global warming. Thousands of scientists and officials from over one hundred countries have collaborated to achieve greater certainty as to the scale of the warming."

It went on to say that because of its efforts global warming has been increasingly recognized. In the 1980s it "seemed to be merely an interesting hypothesis, the 1990s produced firmer evidence in its support. In the last few years, the connections have become even clearer and the consequences still more apparent."

"It was a surprise," said Carola Traverso Saibante of the IPCC. "We would have been happy even if (Gore) had received it alone because it is a recognition of the importance of this issue."

The prize decision was greeted with some skepticism.

"Awarding it to Al Gore cannot be seen as anything other than a political statement. Awarding it to the IPCC is well-founded," said Bjorn Lomborg, author of "The Skeptical Environmentalist.

He criticized Gore's film as having "some very obvious mistakes, like the argument that we're going to see six meters of sea-level rise," he said.

"They (Nobel committee) have a unique platform in getting people's attention on this issue, and I regret they have used it to make a political statement."

This year, climate change has been at the top of the world agenda. The U.N. climate panel has been releasing its reports; talks on a replacement for the 1997 Kyoto Protocol on climate are set to resume; and on Europe's northern fringe, where the awards committee works, concern about the melting Arctic has been underscored by this being the International Polar Year.

Jose Manuel Barroso, president of the European Commission, congratulated Gore and the IPCC and said the prize would help to continue the globally growing awareness of climate change.

"Their contributions to the prevention of climate change have raised awareness all over the world. Their work has been an inspiration for politicians and citizens alike," he said in a statement. "The European Union remains committed to its ambitious goals in the field. I call on all our partners to take this Nobel Peace Prize as an encouragement to approach this challenge even more swiftly, and decisively."

In recent years, the Norwegian committee has broadened its interpretation of peacemaking and disarmament efforts outlined by Swedish industrialist Alfred Nobel in creating the prize with his 1895 will. The prize now often also recognizes human rights, democracy, elimination of poverty, sharing resources and the environment.

The prize for economics will be announced Monday.