A coalition of West Virginia churches stands against a Bush administration-backed proposal to relax restrictions preventing mining activity near waterways, on the grounds it would be an affront to God's creation. 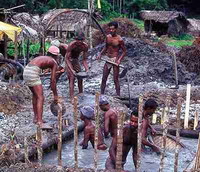 The West Virginia Council of Churches said it objected to exempting valley fills - in which rubble from mountaintop removal mining is dumped in nearby valleys - from the 20-year-old rule restricting mining activity near streams.

"This is a deeply moral position, and one based on scripture," Bishop William Boyd Grove, a council leader, told reporters outside the Capitol.

Current policy says land within 100 feet (30 meters) of a stream cannot be disturbed by mining unless a company can prove it will not affect the water's quality and quantity. The new regulation would allow mining that would alter a stream's flow as long as any damage to the environment is repaired later.

The U.S. Office of Surface Mining proposed the change saying the existing rule has been subject to varying interpretations by the courts.

C. Stephen Allred, the U.S. assistant secretary of Interior for land and minerals management, said in a news release Wednesday that the change would make it clear "what mining activities can and cannot be conducted near bodies of water."

While changes to the policy would apply nationwide, critics argue they would most affect the areas around the mountainous coalfields of southern West Virginia, eastern Kentucky, southwestern Virginia and Tennessee.